This page is remembering the Carlton that used to dominate the High Street where Boots the chemist is now located. 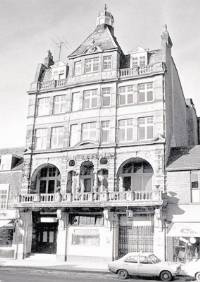 Taken from an article in the Newmarket Journal by Alison Hayes 16th July 2009.

The Carlton Hotel,
a photograph taken just months before
it was demolished and replaced by
the building that is now Boots.

KING EDWARD VII dined there, Fred Astaire danced there and countless US servicemen had far too much to drink there. The Carlton Hotel was a feature of Newmarket High Street for more than 100 years. By the time it was demolished in 1977, much of the old grandeur was long gone, but in its heyday the Carlton had been as exclusive as London’s Dorchester, built to appeal to wealthy racehorse owners and top jockeys.

It is thought to have been built in the 1860s and started life as The Greyhound Hotel. It was partially built around a steel frame with concrete infilling and was reputed to have been one of the earliest examples of that type of construction. Its ornate Victorian front, with a balcony at first floor level rising four floors to a domed mansard roof, is the way most Newmarket people who knew the Carlton will remember it. As the Greyhound it saw many grand occasions, including balls to celebrate the Derby wins of the country’s most celebrated jockeys Fred Archer, who lived in Newmarket until his suicide in 1886.

In 1897, the Greyhound became the Victoria Hotel, probably to coincide with the Queen’s Diamond Jubilee . A directory published in 1900 described some of its features, which included Turkish baths, winter gardens and bijou theatre. The hotel had 70 bedrooms, 12 large self contained apartments, two large bars, a ballroom and a restaurant. Its staircase was of Purbeck marble. The total floor area of the building was 45,000 square feet – no wonder people claimed at the time you could quite easily get lost in its maze of corridors.

Its ballroom was a big attraction and by far the most famous feet to trip round its polished floor belonged to Hollywood legend Fred Astaire. At the time the hotel was demolished, Cecil Coates, who had been its general manager between 1933 and 1946 remembered the visits of the dancing genius. “Fred was a member of the Craven Club which had its headquarters in the hotel he was on stage in London at the time – around 1924 and he came to Newmarket frequently as he had horses in training with the late Jack Leach. I know for a fact that Fred danced on the Craven Club mantelpiece for a £5 bet”, he said.

The arrival of American troops in East Anglia during the Second World War brought wild times to the Victoria, with military police virtually a permanent fixture outside as the GIs got drunk and fought with themselves and some of the locals. And such were the fears that an invasion was imminent that members of a Scottish regiment were seen dancing in the ballroom with their rifles on their backs ready to repel any invaders.

When Newmarket High Street was targeted by a German bomber in February 1941, the Victoria, the most prominent building in sight, freakishly escaped any damage. A story circulated in the town that a German spy had transmitted messages to headquarters from the fish shop in nearby Market Street and that the hotel with its Forces lodgers and the Memorial Hall, where top military brass had been meeting on the day of the attack, should have been bomber’s targets but other buildings in the High Street were hit instead including the post office which then stood between the two.

The Victoria Hotel eventually became the Carlton which continued to be a centre of town entertainment through the 1950s. Newmarket Jazz Club met there regularly and some of the biggest names of the genre played there including Chris Barber, Acker Bilk, Kenny Lynch and Humphrey Lyttleton.

By the early 1960s financial problems were starting to mount and by 1965 the official receiver had been called in to try and sell the hotel. In 1967 an asking price of £55,000 was agreed. A number of deals were discussed but none came to fruition

In 1973 it was confirmed that film magnate and millionaire Irving Allen had bought the Carlton for a reputed £100,000 and there seemed a chance that it might be restored to its former glory. Tenants of the flats in the hotel were told to leave because the building was in such a bad state of repair but a year later nothing had happened and the site was again on the market. Mr Allen’s plans to try and bring back the glory days appeared to have floundered because they were uneconomic.

It was eventually sold to a Peterborough based property company for around £60,000 in 1977. Permission to demolish the hotel and replace it with shops had already been granted by Forest Heath Council and the task of flattening Newmarket High Street’s most iconic building was completed by early May 1977. In its place came chemists Boots with the remainder of the site sold off for the development of the Rookery. Such was the end of the Carlton, a building that had dominated Newmarket High Street for as long as many could remember.

One regular remembered: “The Carlton was more than a building; it was a kind of crossroads of ideas, lifestyles and happenings where people met and felt enriched by being or having been there”

Personally, I liked the look of the Carlton and the fact it was different to the rest of the High Street, but others had different opinions.

The following is an extract from the book NEWMARKET Its Sport and Personalities by Frank Siltzer published in 1923.

…The up-to-date garages are quite out of the setting, but they are comparatively inoffensive compared to the great blot on the picture, the modern Victoria Hotel (now a cinema). One cannot ignore it, cannot get away from it; it is not only incongruous, it is aggressive. The scarlet outrage towers above the surroundings, flaunting an ostentatious vulgarity in an old world environment. What a perversion of good red bricks which can be turned to such lovely uses! Time will mellow the harshness of colour, but no redeeming years can efface the meretricious in spirit and design. Surely some censorship might exercise judgement and condemnation before our provincial towns are spoiled by such buildings as these!

When I was about 14 or 15 there was a time when every Saturday morning after we had finished our paper rounds, me and a mate used to go and play snooker in the Carlton at about 10.30am or when ever we could get in as soon as it had opened. This was usually after we had visited Dinos Cafe round the corner in Wellington Street for a cup of tea and a toasted bun and a go on the pinball machines, the tea always tasted the same, of nothing in particular. We never dared enter the Carlton by the bar entrance to the right of the building which had those concertina type iron gates always firmly closed outside of licensing hours, we used to enter via the main hotel entrance on the left of the frontage. This would have been around 1962-3 so the building was very much in its decline. The hotel entrance/foyer seemed a dark cavernous place with a decorated marble type floor with dark wooden panelling on the walls, very rarely lit I seem to remember, I don’t remember anything I would describe as a reception. About 25 yards in there was a back entrance to the bar that fronted onto the High Street, just through to the left was a large dark room that was home to 2 full size snooker/billiard tables, the one to left was, shall I say for the use of amateurs and had the odd nick and stain in its cloth, whilst the one to the right looked pristine and was almost hallowed ground, it was made very clear to us not go anywhere near this let alone actually touch it. At that time of morning there was very rarely anyone in the bar let alone playing snooker when we arrived so would get two or three games in most weeks leaving before the bar became populated. Occasionally we had to go to the bar to get change for the lights machine this was one shilling (5p) for about 30 minutes, it was always very nerve racking going to the bar, thinking back this was for no reason because we always got the change usually with a quip from the **barman. We never ever attempted to purchase any drink of any type, the thought never came into our heads. I always remember a contraption on the bar at the end where I would meekly stand waiting to be noticed for change. This was a silver frame arrangement holding a large clear bottle (a demijohn, I later discovered) hinged so that it could be tilted and poured, complete with a silver embellished cork. This apparently was the devils brew, Merrydown cider which was only sold in very small units, possibly Nips in special glasses, because it was so strong. I need to comment here, where in the country in the 21st century would you be able to place a silver server of alcohol on any public bar let alone on the public bar of possibly the roughest drinking establishment in the area, which undoubtedly the Carlton was at that time?
** Several years later that barman, I think his name was Brian, became the steward of the Football Supporters Club situated in the building behind the Waggon & Horses. I asked him if he remembered me from those Saturday morning Carlton days, he did after a bit of prompting, by then was at least 2 foot taller and somewhat bigger.

A friend of mine recently told me the following:
In the mid 1950’s an “un-named” lad had a pal who worked at Pye in Cambridge (got the push for making some radios of theirs at home as a sideline) who found out he could use the cutter that made the holes for valve holders etc in radio chassis cut one the exact size of a shilling piece. If the weight of the alloy used was not quite correct, a carefully placed hole in the disc sorted that. Then the blank disc could be sold for 6d for use in the machine for the lights on the billiard tables. Staff kicked us both out when he emptied the cash box one day, despite there being a few genuine coins in it.

Anecdotal Tales of the Carlton

The following are tales of events and happenings that supposedly occurred at the Carlton, I cannot substantiate or confirm their reliability.

-oO~Oo-
Someone made a fortune from the walls of the three giant fridges/cold rooms in the cellars, they were made of lead some say so thick they must have been cast in place
-oO~Oo-
The bailiffs had reason to visit a long term resident to collect a debt. He had taken to his bed and refused to leave so they seized his bed with him in it and carried down and out onto the High Street. There is no record of what happened next.
-oO~Oo-
American service men jumped from the balcony into the fountain in the winter garden. However on occasion, they were thrown during the occasional fracas.
-oO~Oo-